PWTAG Technical notes are updates or new material for the standards and guidance given in the PWTG book, Swimming Pool Water and the PWTAG Code of practice and should be read in association with these publications.

The purpose of chlorination of the swimming/spa pool water is twofold:

The effectiveness of the disinfection process is related to the pH of the water and the lower the pH the greater the efficiency of disinfection.

The process of water treatment used in the UK is known as breakpoint chlorination.

What does breakpoint chlorination mean?

Breakpoint chlorination is the point where the demand for chlorine has been fully satisfied in terms of chlorine addition to the water.

In other words, the chlorine has completely reacted with the bather pollutants leaving a zero chlorine residual.

Once this demand is fully satisfied the chlorine concentration will increase in the pool water to produce a permanent free chlorine residual.

This process can be represented graphically 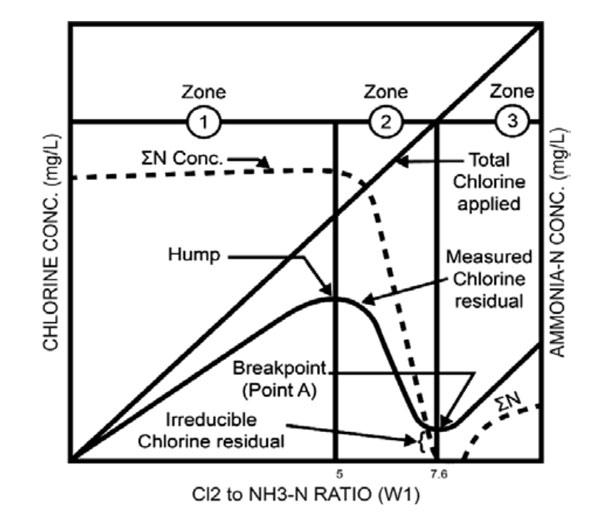 There are three inter-related lines on the graph:

The breakpoint curve is a graphical representation of chemical relationship that exists with constant addition of chlorine to swimming pool water containing a small amount of ammonia-nitrogen. This graph represents a swimming pool where bathing has ceased and no further ammonia-nitrogen is introduced into the pool. During an overnight period sodium hypochlorite is added at a constant rate. This curve has three zones.

Starting from the left side of the graph; there is already a concentration of ammonia- nitrogen (ΣN CONC) in the pool from bathers. Chlorine has been allowed to fall
to zero and Total Applied Chlorine and Measured Chlorine Residual are both zero. Chlorine is then added at a constant rate. The principal reaction in Zone 1 is the reaction between chlorine and the ammonium ion.

This reaction results in a Measured Total Chlorine of only monochloramine to the hump in the curve. The hump occurs, theoretically, at chlorine to ammonia-nitrogen weight ratio of 5:1. This ratio indicates the point where the reacting chlorine and ammonia-nitrogen molecules are present in solution in equal numbers. Monochloramine does not readily degrade.

The breakpoint phenomenon occurs in this zone which is also known as the chloramine destruction zone. As the weight ratio exceeds 5:1, some of the monochloramine starts reacting slowly with further addition of chlorine to form dichloramine, which is about twice as germicidal as monochloramine. A pure dichloramine residual has a noticeable disagreeable taste and odour, while monochloramine does not.

Total Chlorine Applied is still increasing and both the Concentration of ammonia-nitrogen and Measured Chlorine Residual decrease rapidly. This rapid decrease occurs because the dichloramine is reacting immediately with additional hypochlorous acid in a series of destruction reactions to form volatile compounds and other by-products such as nitrogen gas, nitrate and chloride. Therefore, ammonia and chlorine are consumed in the reactions and lost from the pool. Thus, additional chlorine is required to destroy ammonia and chloramines.

The breakpoint (Point A) is the point of the lowest concentration of Measured Chlorine Residual where nuisance chlorine residuals remain and where ammonia- nitrogen is not detected. The nuisance chlorine residuals are mainly organic chloramines which cannot be oxidised any further by reacting with hypochlorous acid, and have no biocidal properties.

Zone 3 is to the right of the breakpoint (Point A) and is where free chlorine residual will appear. The total residual consists of the nuisance residuals plus free chlorine. If trichloramine is formed, it will appear in this zone. Trichloramine formation is more likely to occur at a pH between 7 and 8 if the chlorine to ammonia-nitrogen weight ratio is increased to 15:1.

In practice it has been found the most pleasant water for bathing will occur if more than 85% of the total chlorine is free chlorine.

In reality, ammonia-nitrogen does not stay static but is continually added while the pool is open to the public. To achieve breakpoint chlorination, chlorination must continue after the pool has been closed to the public to ensure oxidation of the additional chloramines every night.

The shape of the breakpoint curve is affected by contact time, temperature, concentration of chlorine and ammonia, and pH. Higher concentrations of the chemicals increase the speed of the reactions.

Breakpoint chlorination is usually measured to determine when chlorination has been satisfied. This is a common practice when disinfecting water in industrial water systems and swimming pools. It is one of the most typical forms of chlorination where adequate chlorine is incorporated into the water to achieve the breakpoint, keeping the water well chlorinated and appropriate for its intended use.

Monitoring the effectiveness of breakpoint chlorination

DPD testing is the most common process used in the UK to monitor the effectiveness of disinfection.

Download the PWTAG Code of Practice for guidance on ensuring that the technical operation of a pool meets quality standards.

Got a question for the team at PWTAG? Click here to email us at customerservices@pwtag.org.